Retail is restored: This is what the turnover figures of Auchan Korzós reflect

The largest sales growth this year was in the categories of clothing, beauty and health care products.

Similar to last year’s practice, the operator of Auchan Korzós in Hungary, Nhood Services Hungary Kft., analyzed the tenant turnover and footfall data as well as customer habits for the first three quarters of the current year. The Auchan Korzó brand has almost 650 stores, service providers, restaurants and cafés in 18 Auchan stores across Hungary, including many well-known global brands.

Despite the pandemic, Auchan Korzós closed a successful year in 2020, with no significant decline in either occupancy or footfall compared to 2019. This success is due to the fact that grocery shopping picked up considerably last year as a result of the restrictive measures and the fact that people were working from home, which had a positive impact on the number of visitors to Auchan hypermarkets and thus to the Auchan Korzó stores.

In the first three quarters of 2021, the number of people entering the shopping centers at the entrances show a slight decrease compared to the same period last year. Between January and September, around 51 million people entered the 18 centers surveyed by the operator, down 2% compared to 2020. The number of people entering the direct entrances to Auchan hypermarkets was 4% lower until September this year, bringing the number of entries down to 2019 levels. The decline is probably due to the fact that last year's stronger shopping activity returned to normal after the worst period of the pandemic: panic buying and stockpiling are no longer typical, and a wider range of stores can be visited, while customers are more distributed among the different types of stores.

The attractiveness of Auchan Korzós improved significantly in the first three quarters of 2021. Compared to the same period in 2020, there was a 22% increase in the number of people who visited the stores specifically for the Auchan Korzós, and did not enter the hypermarket area - almost 3.2 million people at the 14 locations measured. In addition to the circumstances mentioned earlier, this success is also due to the fact that the company has continuously communicated the Auchan Korzó brand and services to customers in various forms during and after the pandemic.
If there are no major restrictions imposed on the retail market for the rest of the year, we again expect nearly 70 million customers to visit our shopping centers by the end of 2021.
This year is still being shaped by the effects of the pandemic. According to footfall data from the main entrances, the most visited months in the first three quarters of 2021 were March and July. Auchan shopping centers had approximately 6.2 million visitors nationwide in March. Restrictions on the third wave of the coronavirus pandemic came into effect in early March, and more people than usual visited Auchan hypermarkets this month due to working from home. In July, the lifting of restrictions brought a boost. Despite the easing of the pandemic, many people choose a domestic holiday destination without catering and became self-
sufficient, which also had a positive impact on the number of visitors to hypermarkets. As a result, just over 6 million people visited Auchan shopping centers in July.

On a positive note, the turnover of Auchan Korzó tenants increased by 7% in the first three quarters compared to the same period in 2020. This slightly offsets the decline from a year earlier, when store turnover fell by an average of 9% in the January-September 2020 period compared to the same period in 2019, due to the restrictive measures imposed by the Covid-19 crisis.

The strongest expansion was observed in the beauty and health care products sector until September this year, the turnover of these products increased by 19% compared to the previous year. With this, this sector is one of the big winners of the Covid period and at the same time the fastest growing product category.

The clothing and footwear sector quickly recovered following the spring lock-down on Auchan Korzós, again due to the fact that because of the high visitor number of Auchan hypermarkets, they had a much higher turnover than in other shopping centers. Clothing sales were up 16% compared to the same period last year and show a 10% increase in turnover compared to the same period in 2019. On the other hand, turnover in tenants offering services fell by an average of 5% compared to the first three quarters of last year, an area where we expect to see a strengthening by the end of the year. 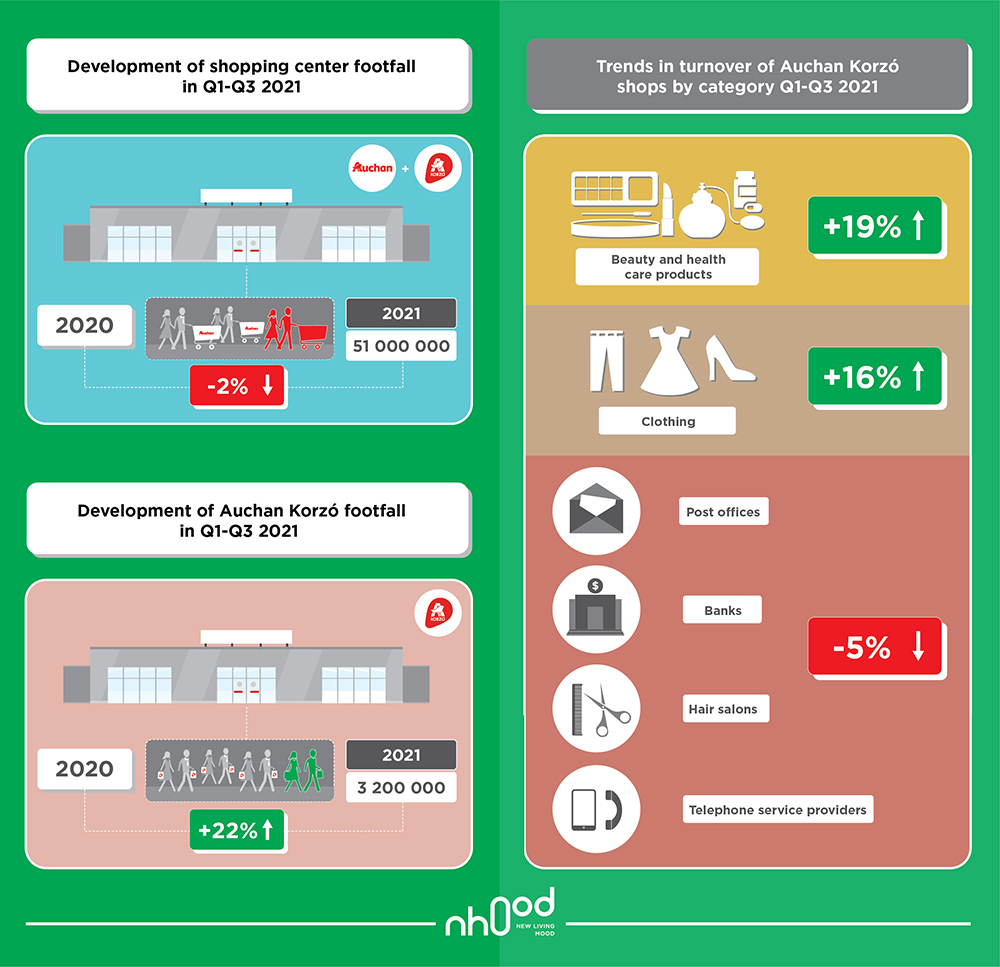 Of the retail stores, the pandemic hit currency changers, travel agencies and children’s playhouses the hardest, with the operator providing significant rental discounts to these tenants. Due to the high traffic of Auchan hypermarkets during the pandemic period, the food court units in Auchan Korzós did not suffer as much loss as the restaurants and cafés relying more on tourism, such as places opening onto the streets or located at larger shopping malls.

Balázs Gábosy, Director of Business Development, Sales and Operations of Nhood Hungary Services Kft., the operator of Auchan Korzós, evaluated the past year as follows:

"The last three quarters have been successful. For our stores, where traffic fell sharply due to the pandemic, we provided significant fee reductions during the most difficult period. Fortunately, our experience has been that the revenues of troubled stores have returned to pre-epidemic levels this year. Our fundamental aim is to ensure that Auchan Korzós are successful and that the successes we’ve achieved are sustainable, so we plan to remodel several of our locations in the upcoming years. In addition to expanding services and functions, we will also renew the design, while paying more attention to homeliness. In addition, our sites are currently undergoing a rebranding process following last year's brand refresh. We want to operate shopping centers that are modern in every respect and have features that meet the needs of the present era, so that our stores, together with the hypermarket, can become the urban sub-centers of the neighborhood."