In the second half of the 2010s, Hungary's economy showed higher growth than in most of Europe. GDP has risen steadily as a result of improved employment and productivity. However, the COVID-19 pandemic has hampered this favorable process. Restrictions aimed at curbing the spread of the virus have significantly slowed down all economic activity. Since the alleviation of the epidemic, the Hungarian economy has been slowly recovering, although its development may be delayed by new factors independent of Hungary. In the following article, we have collected the most important economic indicators of the recent period.

From the beginning of 2022, we experienced a gradual alleviation of the Covid-19 epidemic, and all major restrictions were lifted in early April following a decrease in the number of cases and deaths. This is expected to have a positive impact on both the retail and tourism sectors, but the performance of the economy may be hampered by new factors largely independent of Hungary, such as the energy crisis, the impact of the Russia-Ukraine war conflict and related sanctions or rising inflation. 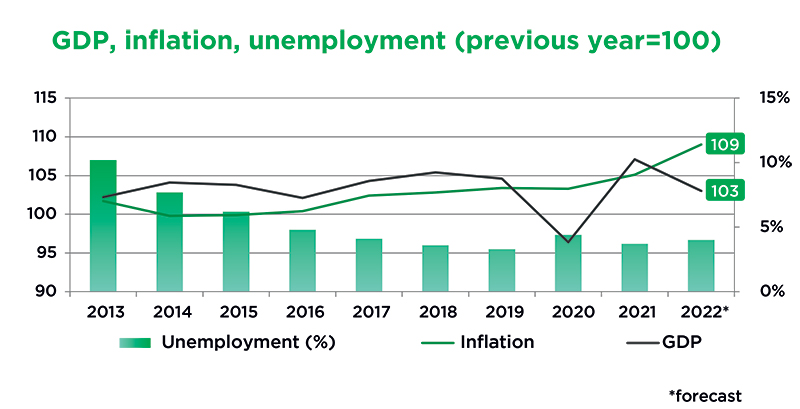 Industrial production grew by 5.5 % year-on-year in January-March, with a significant increase in construction: the performance of the first three months was 16% higher than last year. 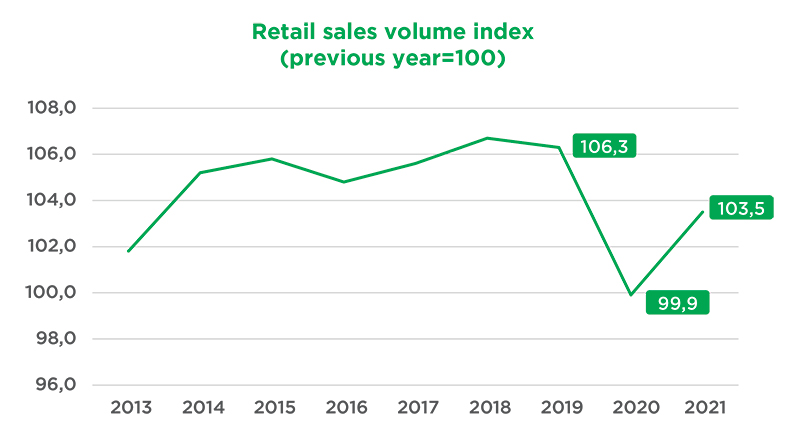 Tourism, which has been particularly affected by the pandemic, seems to be recovering, with more than five and a half times the number of guest nights spent in March 2021 (although still 28% down on the same month in 2019).

Inflation began to rise at an accelerating pace at the end of 2021, with decades of records breaking since then. In March 2022, consumer prices were on average 8.5% higher than a year earlier; the last time inflation was so high was in June 2007. According to the MNB's forecast, annual inflation will be between 7.5-9.8% in 2022, and only a slowdown in the rise in price levels is expected from the middle of the year. Global price increases are driven by dynamic increases in energy and commodity prices.

Real earnings growth was 11.8%, up from 6% a year earlier, which could give a boost to retail sales growth.

Since the end of 2021, the MNB has increased the key interest rate from 2.4% to 5.4% in four steps, and the forint weakened significantly against the euro at the beginning of 2022. At the beginning of March, almost 400 HUF had to be paid for 1 EUR. The exchange rate has settled somewhat since then.

We expect dynamic price increases to encourage customers to be more conscious of their consumption behavior, leading to increased footfall in high value stores, such as hypermarkets with a strong private label offering. The average basket value is expected to increase in almost all categories, but the extent of the increase will vary, with daily consumer goods likely to see the largest increases.