Inflation accelerated in the third quarter of 2022, with consumer prices being an average 20.1% higher in September than a year earlier. The weakening of the forint against the euro continued to intensify. Retail sales expanded 8% year-on-year in the first nine months, driven presumably by inflation, while the rise in construction prices moderated as the housing market slowed.

The performance of the Hungarian economy in the third quarter exceeded a year earlier by 4.1%, the growth of the first nine months compared to the same period of 2021 was 6.1%. The growth was driven by industry (production of road vehicles, computers, electronic and optical products, and electrical equipment) and the expansion of market services (mainly transport, warehousing). According to the analyses, an increase of 3-4% is expected for the whole year, and the forecasts gradually moderated during the year. 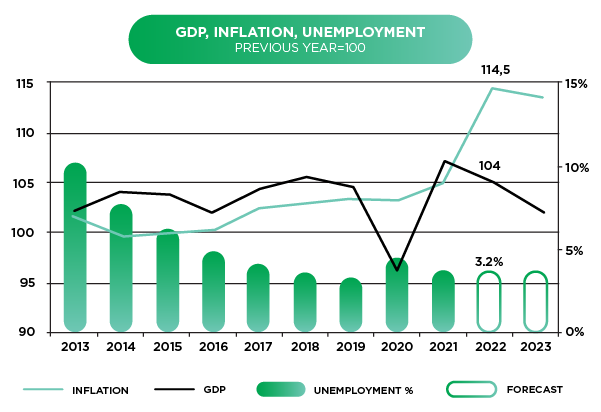 In the January-September period, the performance of the construction industry increased by 4.8% compared to a year earlier, but at the same time, production in the construction of buildings decreased by 7.5%. Construction industry prices rose by over 20% in the third quarter (compared to the previous year), but the quarterly rate of growth slowed from nearly 8% to 5.2%. The slowdown in price growth is expected to continue until the end of the year.

Retail sales increased by 8% in the first nine months, compared to the same period of the previous year. The volume of food and food-related mixed retail increased by 0.5%, while the trade in fuel available at official prices increased by 27% since the end of 2021. Fuel consumption did not decrease while the price cap remained in effect (the official price for fuel was abolished in November). Quarterly data on retail sales show a downward trend, the rate of expansion fell by nearly 7 percentage points compared to the previous quarter; this can probably be traced back to more conscious customer behavior.

The turnover of commercial accommodation increased by more than one and a half times compared to the previous year: by the end of September, 21 million guest nights were registered (+58%). Passenger traffic at Liszt Ferenc International Airport exceeded 9 million in the first three quarters of this year, which is double the total traffic of the previous year.

Inflation strengthened at an accelerating pace even after the middle of the year. In September 2022, consumer prices were on average 20.1% higher than a year earlier. Household energy and food prices rose the most (62% and 35%). From August to September, prices increased by an average of 4.1%. Annual forecasts are constantly adjusted to the current situation: since June, the MNB has raised its forecast for annual average inflation from 11-12.6% to 13.5-14.5%. The price increase may be around 11.5-14% in 2023. The official pricing introduced to control the cost of living caused a shortage of goods for several products, and also significantly increased the price of other products.

In September 2022, the gross average salary of full-time employees was HUF 504,100, which was 17.8% higher than a year earlier. The mid-year minimum wage increase, and occasional pay rises can fuel the already significant inflation by increasing demand.

The unemployment rate rose to 3.8% by the end of September, but there is a significant labor shortage in many areas. The tourism sector and hospitality industry are particularly affected. The employment rate of 15-64-year-olds rose to 74.6%, and was the highest in the capital (79.4%).

The base interest rate set by the MNB was 13% in September, and the Budapest Interbank Forint Lending Rate (BUBOR) for a 12-month period rose from 2% to 14% in one year. The weakening of the forint compared to the euro continued: it reached a peak of 433 HUF / 1 EUR in mid-October.